Amazingly cauliflowers, sprouts, broccoli, kale and cabbages not only all belong to the same genus, i.e. Brassica but they all belong to the same species, oleracea! The fact that the single species, Brassica oleracea can produce so many wildly different cultivars is a reflection of the important role these plants have in agriculture right around the world as well as the length of time that they have been under cultivation.

Initially at least there can be no doubt as to the cauliflower’s cabbagey credentials wrapped in a cocoon of heavily ribbed outer leaves, even here in this relatively young specimen where only the inner leaves remain the whole appearance shouts CABBAGE but remove these leaves and the central white mass or curd of the cauliflower is revealed. The curd as the name cauliflower suggests is the immature flower head of the plant. 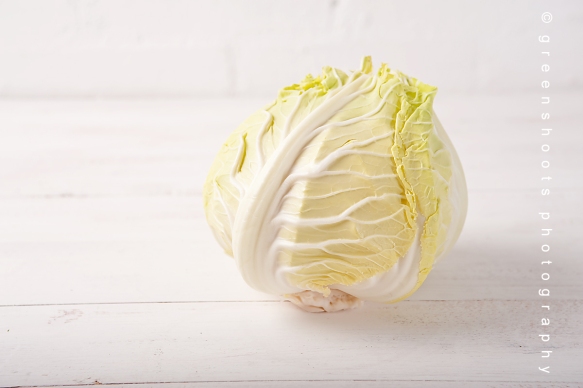 Cauliflower has a long, though not necessarily glamorous place in British cooking; those of us of a certain age will remember how, like all other vegetables, it was boiled to the point of destruction before being triumphantly served. However, when cooked sympathetically and with respect this vegetable with its unique flavour has a lot to offer and it finds its way into numerous recipes, especially Indian ones but on this occasion I am going to focus on that all time comfort food dish of cauliflower cheese. The secret to a really good cauliflower cheese is ensuring that the cauliflower does not become too wet or over cooked before adding the cheese sauce. In this recipe the soft mellow creaminess of the cheese sauce and baked cauliflower is contrasted  against the salty intensity of Smoked Black Forest ham combined with a dusting of the wonderful and too little used spice, mace (for more about mace see http://wholespice.com/blog/?p=1468).

Serves 2-3 as a side dish or if you prefer not to share you have a perfect warming super for one.

freshly ground black pepper; crush a few peppercorns in a pestle and mortar

To start begin making the sauce. Place the milk in a saucepan and bring to the boil and then remove from the heat while adding the bay leaf and cloves and set to one side so as to allow the flavours to develop.

Switch on the oven and set to 190oC (fan oven) and leave to warm up.

Prepare the cauliflower by removing the leaves and then break the curd into roughly equally sized florets while cutting off any thick stems. Place the florets in a steamer and steam on top of wok for 5 – 10 minutes using a skewer to judge when the florets are cooked through; they should still be firm. Do not over cook. Remove the steamer from the wok and leave to cool with the lid off the steamer; this will help the cauliflower lose any excess water.

Complete making the cheese sauce by mixing the butter and flour together over a low heat to form a roux. Remove the bay leaf and cloves from the milk and gradually add all of the milk to the roux, mixing all of the time so to ensure a smooth lump free sauce. Increase the heat slightly and slowly add all but a small handful of the cheese to the sauce while continuing to stir. As the cheese melts into the sauce the mixture will become thicker and after stirring for a further minute or so the sauce should be taken off the heat.

To assemble the dish place the florets in a suitable oven proof dish and pour over the cheese sauce. Finish with a light sprinkling of mace as well as the remaining cheese and place in the oven for 15 – 20 minutes.

At the same time place the slices of ham on a lightly oiled baking tray in the oven and cook for 5 -10 minutes until they are crisp but not burnt. When done remove the slices and place on some kitchen towel to mop up any excess fat or oil. 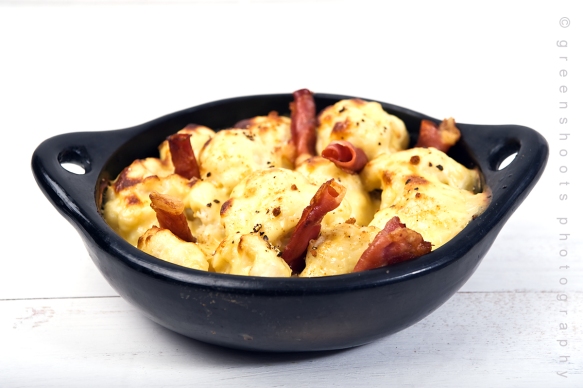 Once the sauce on the cauliflower has begun to colour the dish is ready and can be removed from the oven. Pieces of the cooked ham can then be sprinkled over the cauliflower and the dish served. 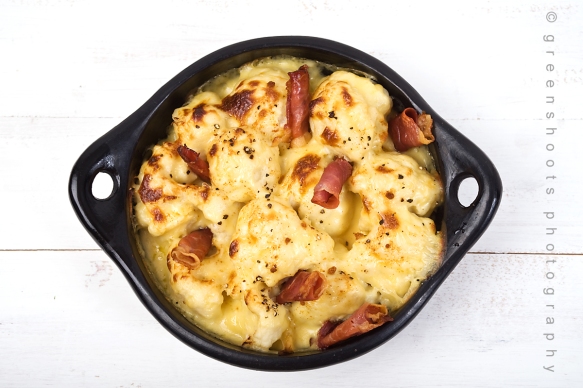 Be careful it will be extremely hot!

Architecture & everything around it.

A journal of an Indonesian in The Netherlands