For some time now I have wanted to try my hand at photographing moules mariners but the opportunity has yet to present itself in any of my commercial shoots. So last week I finally gave up waiting and instead decided to make my own moules mariners to photograph. Having made the decision the next step was to buy some mussels and that of course meant a drive out to the Loch Fyne Oyster Bar. Although Loch Fyne is only an hours drive away from Glasgow (assuming that the A83 is not closed by yet another landslide as the road climbs up to the appropriately named Rest and Be Thankful) it’s a world apart, this is especially true at this time of year when roads are relatively quiet and the hills are looking their best; there is no soft cloak of green to mask the landscape and the snow on the hills some how always makes them seem closer and higher! 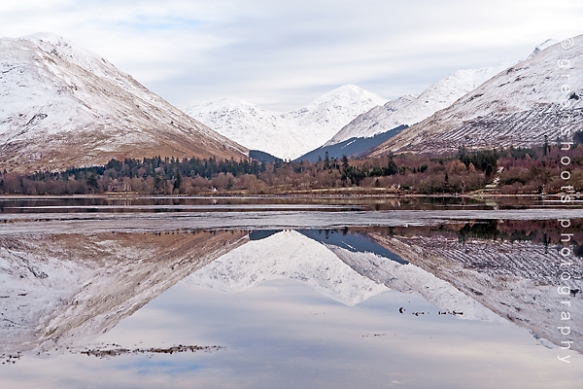 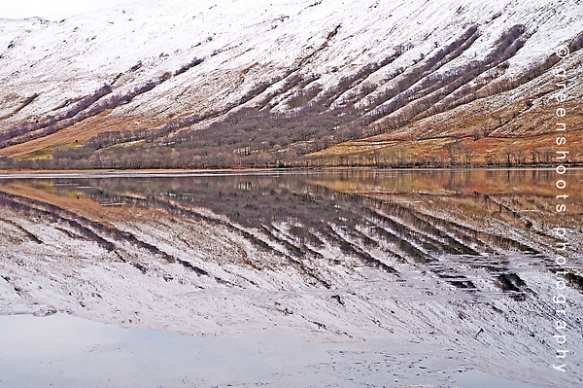 The view from the Oyster Bar at the head of the loch with its steep deeply furrowed hills which hem in the loch on both sides. 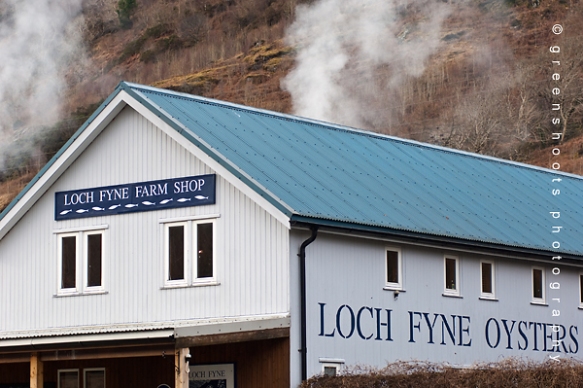 The Loch Fyne Oyster Bar in 2011 before its 2013 renovation – the Farm Shop has become a deli and there is a new main entrance but otherwise little has changed outside apart from the addition of some giant sized funky New England style chairs a theme which is taken up inside too with the bar stools. 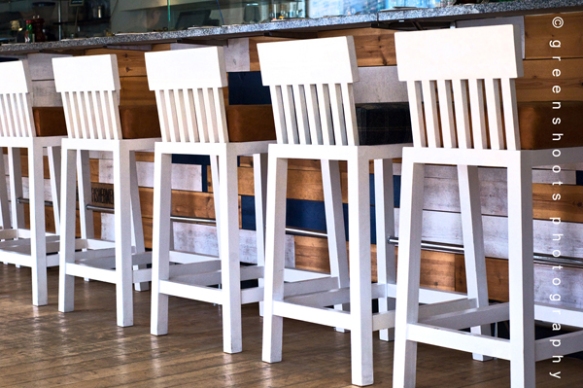 The Oyster Bar first made its appearance in 1988 and it has developed as a popular stopping off place as well as a destination in its own right. For more information about the history of Loch Fyne Oysters please visit the company’s web site: http://www.lochfyne.com/about/

Of course any visit to the Oyster Bar inevitably involves oysters so in addition to mussels I also returned home with half a dozen oysters. Eaten au naturale with a squeeze of lemon and a dash of Tabasco sauce accompanied by some good crusty buttered bread and a glass of dry white wine there is little to beat it.

As for the mussels. There are innumerable recipes for moules mariners all of which essentially come down to remove the beards, wash and discard any shells that are broken or do not close, cook for 5 to 10 minutes in a large heavy bottomed pan with a lid containing diced onion, a bay leaf and a sprig of thyme and a glass of white wine, plus or minus an equal quantity of cream. Discard any shells that don’t open and serve. For a more detailed recipe see http://uktv.co.uk/food/recipe/aid/655746 or any of several dozen more that you will find with a simple Goole search.

The mussel shell next to the black bowl in the picture below is all the cutlery that you need – use them like tweezers to pick the plump meats from the other mussels and while the bread is used to mop up the juices. 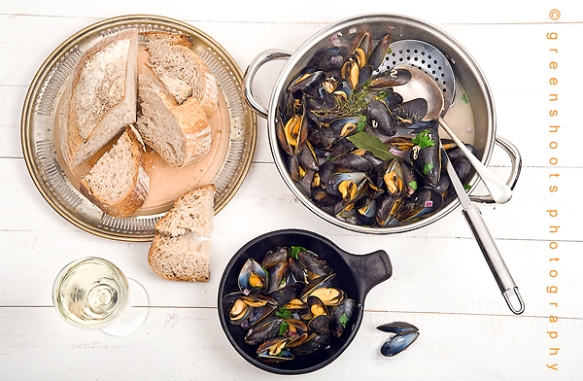 Moules with chunks of fresh bread and a glass of sauvignon blanc a perfect combination.

The moules tasted great; with such great ingredients its hard to go wrong. As for the photography I am reasonably pleased with the results. I like the way that the plump  orange meat of the mussels contrasts with the shells and the black bowl. I also took the opportunity to take some shots form directly above the dishes, a shooting angle which is increasing in popularity, I like the cropped shot where we just see the curved shapes of the pan and the bowl and the way the back pottery contrasts with the stainless steel pan both of which work well with the white boards of the background. In the non-cropped shot more attention should have been given to the placement of the bread board so that it didn’t overlap with the pan handle. A plain wooden board would probably have worked better. The wine glass needs to be brought more into the shot and photographed more directly from above, as it is it looks as if it is falling over, the lines between the white wooden boards need more attention too as they are distorted by the lens, they should be parallel! I would also have liked to have seen more detail and colour in the shells, which would have meant a different lighting setup. All in all it looks as if I have an excuse to make another trip to Loch Fyne in the not too distant future!

As is always the case with seafood take the very best and freshest ingredients, prepare simply and…. enjoy

I tend to find that people either love them or loath them but for me oysters are an all time favourite and a perfect late brunch accompanied by a dash of Tabasco and a squeeze of lemon juice together with some slices of fresh bread (butter optional) and of course a glass or two of crisp white wine; a New Zealand Sauvignon Blanc is ideal or for a really special occasion a dry champagne! I suspect that oysters are more frequently eaten in restaurants than at home and there are certainly many great seafood bars and restaurants in Britain including Riddle & Finns in Brighton Randall & Aubin in Soho or for somewhere really special try the J Sheekey Oyster Bar in Covent Garden  and off course there are the Loch Fyne Restaurants which are now found widely throughout the UK. Alternatively if you are flying there are always the Caviar House & Prunier Seafood Bars which provide a tranquil oasis combined with a touch of luxury before you board your budget airline flight!  In all of these place oysters perform a star role but they are so easy they should be not only for restaurants after all there is no cooking!

Oysters all too frequently have a bad reputation being associated with food poisoning but if you get them from a reputable supplier who has a high turn over and a reputation for quality and freshness the risks are no greater than for any other uncooked food. In Spain, Portugal and France finding top quality oysters is easy with even the large supermarkets such as Auchan having superb fish counters but in the UK you are best finding a specialist fish monger. The Pacific Rock Oyster is the most widely available oyster in the UK but it is possible to find the native oyster especially in the south of the UK; though I must confess that I actually prefer the rock oyster but my all time favourite are the French Fines de Claire. Whatever sort of oyster you end up getting you are always faced with one seeming “insurmountable problem” i.e. how to open them! There are countless tools and even chain mail gloves that you can buy to protect yourself during the process but the chances are that you already posses the best possible tool; namely a small screwdriver!

Copyright: All photographs and text in the blog “Brunch at Goodies” are subject to copyright. © Keith Gooderham 2011-2012. All rights reserved. Do NOT copy material without requesting permission to do so. If you would like permission simply contact me.

Food of Many Colors

"I am not a chef. I'm not even a trained or professional cook. My qualification is as an eater. " -Nigella Lawson